A simple tube geometry was created by placing a circle on the x-z plane and another on the y-z plane. These two circles had their height, horizontal offset, and radius parametrically controlled. A line was drawn between the circles such that the degree of curvature of the line was also parametrically controlled. A "Design of Experiments" was run where each of the parametric values was varied randomly, and a spreadsheet of the value combinations was saved. Each potential geometry could be seen by then selecting a row from the spreadsheet, and applying those parameters. This spreadsheet could be output to a CSV file which could then be run through a genetic algorithm.
Posted by Matthew "Punam" Jensen at 2:57 PM No comments:

This animation shows the attempt to create a 3 dimensional lattice of these solid parts (members and nodes). The lattice is reused from assignment 7 (a grid of points from the intersection of two fans of lines projected vertically onto a surface-through-point). At this point, a solid member was made, as well as a solid node sphere. These shapes are to be used as power copies.

Difficulties arose. Not least of which being that the logic of power-copies does not lend itself well to the creation of solids in Digital Project. All Solids were required to be the PartBody portion of the tree, which lead to obvious problems, and a very tedious power copying task.

It is desired that the nodes would be output as 3d geometry would could be 3D printed. To this end, the geometry was exported to a .iges file and opened in Rhinoceros 3D. upon opening the file, it was all but unusable. It was fully of glitches, and even when the spheres did render, they were simply spherical without the desired holes.
Posted by Matthew "Punam" Jensen at 11:39 PM No comments: 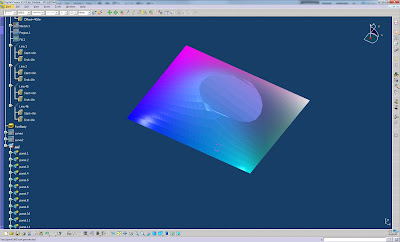 Building from the previous assignment where the lines were projected onto a surface-through-point, only lines in the y direction were used. A second UDF was put into the original catalog and through a new knowledge pattern it was used in the design file. Two of the original curves were used to make a series of rectangular facets. These facets were then populated across the entire 3 dimensional surface-through-point. As each facet was made it was assigned a color based on its location in the grid, and each color varied slightly from the color of it's nearest neighbors thus creating a color gradient.
Posted by Matthew "Punam" Jensen at 11:17 PM No comments:

This is an exercise in creating a UDF (User Defined Feature), outputting it into a catalog, and then using it in a design file. The actual assignment involved creating a series of lines, and then projecting them 'normal' onto a surface-through-point. These lines were run in both the X and Y direction to test my ability to follow the tutorial.
Posted by Matthew "Punam" Jensen at 11:03 PM No comments:

The power copy framework from assignment 6 was reused. This was modified such that for each power copy, the surface through point had a different point height. This made the surface more or less bumpy than its neighbors. These heights were determined by values which were imported from an MS Excel spreadsheet. Excel has the ability to generate "random" numbers. A sample of potential geometries can be seen in the animation along with the corresponding Excel values.
Posted by Matthew "Punam" Jensen at 10:58 PM No comments:

A wavy grid was made. and points from it were projected in the Z direction onto a 3 dimensional surface. The original Power Copy was created as a triangle with a raised middle bump (surface through point). This original geometry was power copied on the raised point grid. The shape of the underlying 3 dimensional surface was modified, and the grid was tweaked to yield dynamic changes in the overall form.
Posted by Matthew "Punam" Jensen at 10:48 PM No comments:

Two shapes (a square and a parallelogram) were made in separate part files, and then imported into a product file along with an angular framework. When the framework is changed (left window) The product file dynamically changes and "folds" itself up.
Posted by Matthew "Punam" Jensen at 10:43 PM No comments:

Matthew "Punam" Jensen
I'm a dude from Oregon, in Michigan doing design work pretty much all day every day.